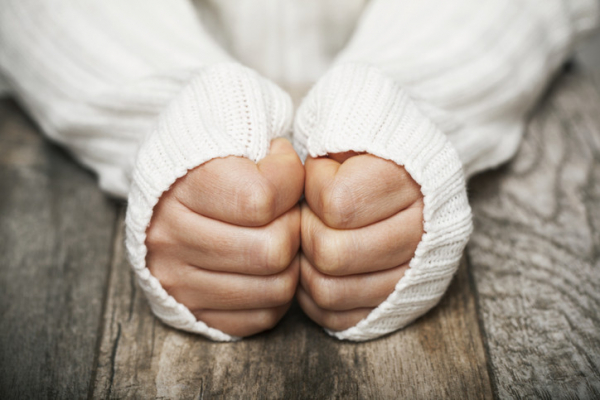 If your fingers or toes ever turn pale (or even ghostly white) and go numb when exposed to cold, you might assume you just have poor circulation. That’s what I used to think when I first started noticing this problem with my own hands many years ago. It usually happened near the end of a long hike on a spring or fall afternoon, when the temperature dropped and I didn’t have any gloves handy. My pinkie, third, and middle fingers would turn white, and the fingernails took on a bluish tinge. As I soon discovered, I have Raynaud’s phenomenon, an exaggeration of normal blood vessel constriction.

When you’re exposed to a cold environment, your body reacts by trying to preserve your core temperature. Blood vessels near the surface of your skin constrict, redirecting blood flow deeper into the body. If you have Raynaud’s phenomenon, this process is more extreme, and even slight changes in air temperature can trigger an episode, says rheumatologist Dr. Robert H. Shmerling, senior faculty editor at Harvard Health Publishing and corresponding faculty in medicine at Harvard Medical School.

"Cold weather is the classic trigger for Raynaud’s phenomenon. But it can occur any time of year — for example, when you come out of a heated pool, walk into an air-conditioned building, or reach into the freezer section at the supermarket," he says. In addition to the hands, Raynaud’s can also affect the feet and, less often, the nose, lips, and ears. During an episode, the small arteries supplying the fingers and toes contract spasmodically, hampering the flow of oxygen-rich blood to the skin. Some of these vessels even temporarily collapse, and the skin becomes pale and cool, sometimes blanching to a stark white color.

Technically, Raynaud’s phenomenon is a circulation problem, but it’s very different than what doctors mean by poor circulation, says Dr. Shmerling. Limited or poor circulation usually affects older people whose arteries are narrowed with fatty plaque (known as atherosclerosis), which is often caused by high cholesterol, high blood pressure, and smoking. In contrast, Raynaud’s usually affects younger people (mostly women) without those issues — and the circulation glitch is generally temporary and completely reversible, he adds.

As I can attest, the best treatment for this condition is to prevent episodes in the first place, mainly by avoiding sudden or unprotected exposure to cold temperatures. I’ve always bundled up in the winter before heading outside, but now I bring extra layers and gloves even when the temperature might dip even slightly, or the weather may turn rainy or windy. Other tips include preheating your car in winter before getting in, and wearing gloves in chilly grocery store aisles.

In general, it’s best to avoid behavior and medicines that cause blood vessels to constrict. This includes not smoking and not taking certain medications, such as cold and allergy formulas that contain phenylephrine or pseudoephedrine and migraine drugs that contain ergotamine. Emotional stress may also provoke an episode of Raynaud’s, so consider tools and techniques that can help you ease stress.

If necessary, your doctor may prescribe a medication that relaxes the blood vessels, usually a calcium-channel blocker such as nifedipine (Adalat, Procardia). If that’s not effective, drugs to treat erectile dysfunction such as sildenafil (Viagra) may help somewhat. You may not need to take these drugs all the time, but only during the cold season, when Raynaud’s tends to be worse.

Once an episode starts, it’s important to warm up the affected extremities as quickly as possible. For me, placing my hands under warm running water does the trick. When that’s not possible, you can put them under your armpits or next to another warm part of your body. When the blood vessels finally relax and blood flow resumes, the skin becomes warm and flushed — and very red. The fingers or toes may throb or tingle.

What else is important to know?

Some people with Raynaud’s phenomenon have other health problems, usually connective tissue disorders such as scleroderma or lupus. Your doctor can determine this by doing a physical exam, asking you about your symptoms, and taking a few blood tests. But most of the time, there is no underlying medical problem.